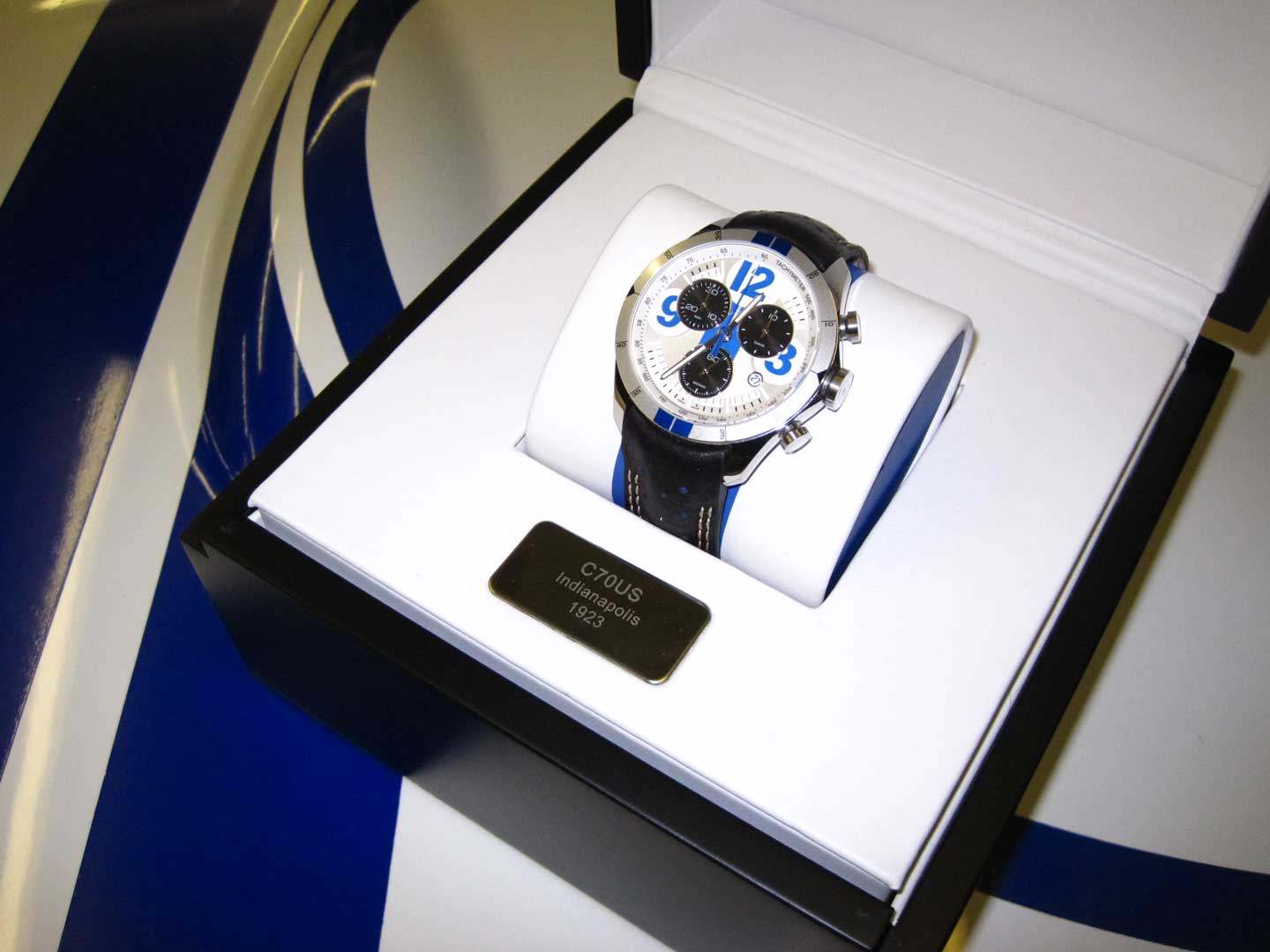 Windscreen project falls over but we’re all still standing after the New Year Bash. Gary gets an award and your beloved leader is left speechless for the first time!

Yes, the NYB was, I have to say, a quieter turn out this year due to financial pressures that we are all experiencing at the moment. The Granary really pulled the stops out for us this time and we had a lovely meal. They have re-developed the bar area and redecorated the Cottage room that we use as our after-dinner pit stop. I had hardly sat down before Celia was up and talking (no surprises there then) about how the present Mrs Cluley puts up with all the great unwashed turning up for bed and breakfast at chez Cluley over the Classic Motor Show period etc and hands her a present. When opened it’s a necklace and very much in her style.

Then she turns on me (not for the first time either!) and hands me a card with a very dashing young man in dirty white overalls leaning against that “bloody white car” parked on the Le Mans track. Inside I see lots of signatures from members old and new. Then she places a large presence in my lap (no FJ…..) so I start to work my way through the wrapping (no-no FJ…) to reveal a large dark box (NO FJ!). I caress the edges thinking how do I open this (yes FJ my memory is as bad as yours!) and when I do, behold nestled in silk ….is….a beautiful……watch!

This exquisite timepiece is made by Christopher Ward of London and is part of their Grand Prix Series, limited to 500 of each design. My watch celebrates the first Grand Prix winner in the USA, Tommy Milton at Indianapolis in 1923. But the main reason this watch was chosen for me is that it sports the racing blue stripes which are synonymous with the Cunningham race team who were the first team to use stripes to identify themselves at Le Mans.

I believe that Ian saw this watch on the internet and thought “that’s sooo him!” I have to thank Celia & Ian for organizing this and for all the members that “chipped in” to purchase it. I’m very touched (some would say from birth!) by the thought that has gone into this and thank you all so much for a lovely gift but if you want to see it in the flesh you will have to attend one of our meetings this year!

I may not run another NYB for a while or what do you think about moving it to a cheaper venue? Or perhaps someone would like to take this annual event on and organize it somewhere else… send me your thoughts (clean) on the back of a fiver.

After all that excitement, my little homemade trophy paled into insignificance really. Yes, I produced another little P&WOR award, this time for Gary Stretton for all his hard work developing the windscreen project. I think he was happy with it and it’s sitting on his desk at work.

For those of you that haven’t heard the very sad news that Auto Windscreens have gone into receivership just a few days before my last report all about the production process and prices! Gary did some frantic phone calling and a couple of weeks later hired a suitable car, drove up to Cheshire and collect the bucks so we have them in our control.

Chris and Paul had been down to Gary’s workshop to trial fit a complete set of new glass on the Thursday and by the following Monday the business was closed down. Both these guys are out of pocket on their expenses etc. Gary and I are trying to raise a little something to send them as a thank you for all their collective hard work.

As I write this Paul is looking for alternative production possibilities and we have assured him that we will hold fire and see what he comes up with as we feel it is only right that we place the order with him in the future if at all possible.

Ok first one of the year (for me at least) is Malvern on the 17th April. I’m organizing this one for the all-new and improved Birmingham TR Group now under new management, welcome the excitable Phil “Cockachumpy” Daniels. We haven’t done this one before but 710 have attended a couple of the autumn shows and there very good. By the time you read this, the early booking fee tickets will be gone but you can pay £6 on the gate on the day.

Then we have another Birmingham TR Group outing on the 1st May at the Coventry Transport Museum. Group Leader Phil (I told you he was keen!) has secured 40 spaces outside the museum to put on a display. I already have Ken & Christine, Celia & Ian and FJ attending but if anyone else would like to come along your more than welcome. All the above are already wedged into chez Cluley (as usual) but there’s always room for a small one.

I finally got my hands on a photo that had been floating around the dashboard of Richard’s van for a few months. It was given to him by Lin marshal (thanks Lin but next time tie it to the leg of a chicken, it will get to me quicker!) and was taken sometime in the early eighties. It shows NRC 667 & 921 GEH parked next to each other. These cars are now both abroad, NRC is owned by Wolfgang Puritz in Germany who was with us last year at the international. The last owner I have for GEH is Joachim Sverd in Norway. If you’re watching Joachim let us know how you’re getting on. Sadly the registration of the third car in the picture is out of view but by the look of the door glass it’s a phase 2

Also, I have to thank Bob Rowland for sending me a copy of The Meccano magazine which had an article on the Peerless Prototype. I have seen this article before and it’s headed Road & Track written by Peter Lewis. Can anyone out there shed any light on why it was in this publication?