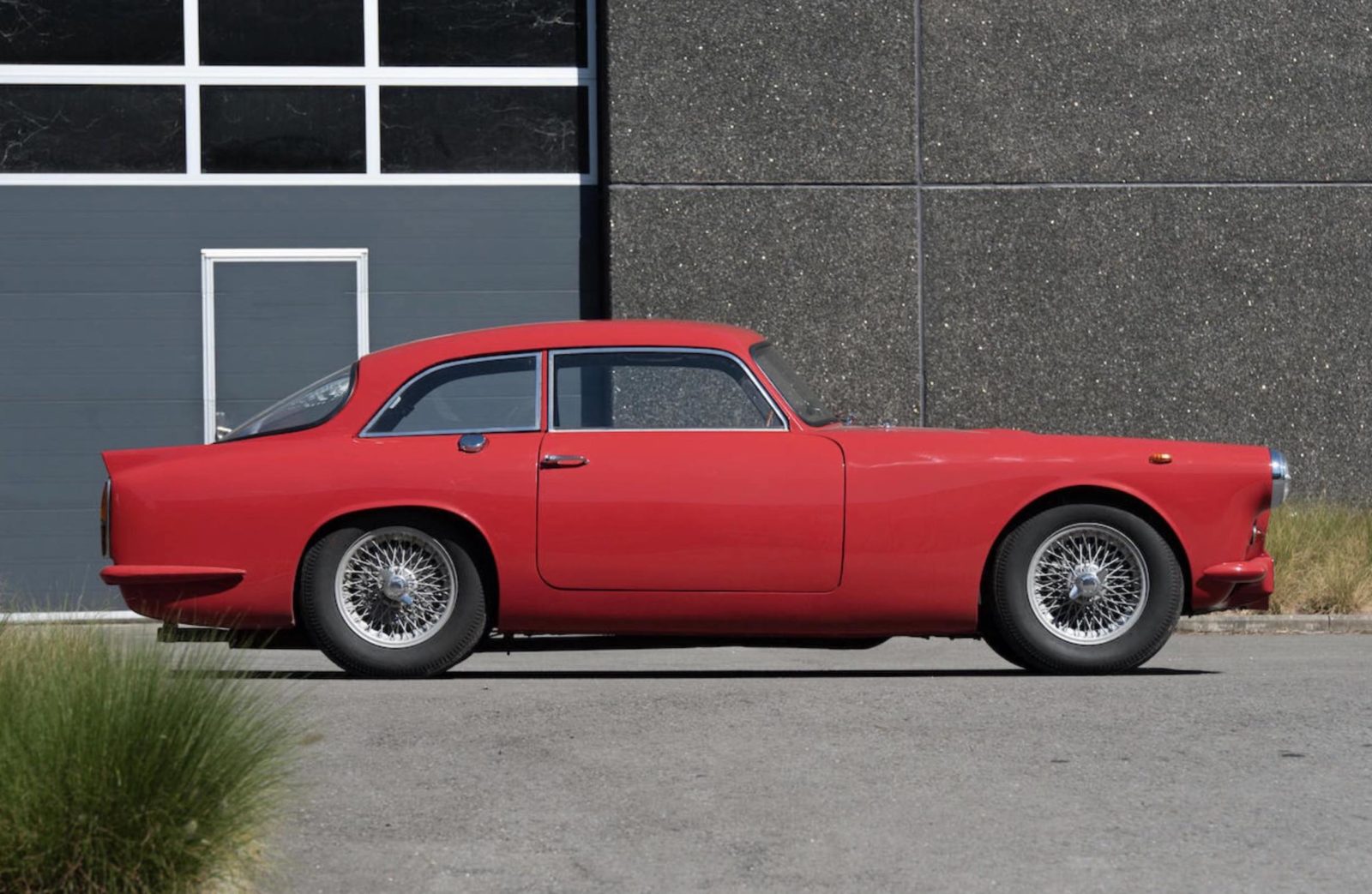 Hello once again Avids, have we got a cracking report for you this time, cars from all corners of the world, cars sold, cars winning awards, cars fresh out the box and a splash of time travel to boot!

Ihope you are all well. I have only spoken to a few of ‘the great unwashed’ over the summer and generally you all seem to be getting on with life and making the best of it. If we haven’t had chance to chat, give me a call … and then we will!

Don’t forget, there are a lot of people out there that don’t have the opportunity to scrabble about on a cold concrete floor, covered in oil knocking the skin off their knuckles, so count yourselves lucky!

Let me start this section with some auction news. GT2/00198 came up for sale with Bonhams Action House in Brussels on 6th September. I do know of the car and its owner prior to the auction but unaware that it was going for sale. I was surprised to see that it sold for £41,000 inc. premium. This, I am sure, is a record price for a Peerless GT. A small amount of detailing would be needed to make it a totally correct/factory original car. It looks like it is still on its original chassis but has had a lot of engine/suspension work and good solid modifications that would make it a very competent and reliable car in modern traffic.

So, what does this mean for ‘our cars’ I hear you mutter over the top of your Ovaltine? Well I would think it may help with valuations for insurance purposes (now a line in the sand has been drawn) and we have been sadly lagging behind Swallow Dorettis for some time, but at these prices are we going to see less turning up in a muddy fields and pub car parks I wonder?

Next, we have Eric from Munich who has been restoring his Phase 1 over a four-year period. All that time and effort paid off by the look of things. He writes, ‘My Peerless finished last week. Engine TR3 4 Weber carburettors 156 HP. On Sunday, at a FIVA Concoure de Elegance we were class winners 1 prize cup!’ Well done Eric and it does look splendid with the sun shining by the lake. I have more photos of this car and he has skinned the underneath in luvered alumium panels.

Tom emailed me with an update on his car, GT2/00182, this is something (sadly) that I don’t usually get from members abroad as we rarely get to meet and chat. Tom writes, ‘I realised sitting at home last night and perusing the Peerless GT Forum site that I hadn’t really posted anything for a long while about my car, and hadn’t followed up with anyone who had provided assistance in getting it back on the road. First, thanks to you all for your assistance. We first drove the car on the road in September of 2019, then shipped it from my brother’s to where I live in Wisconsin right at Thanksgiving, so just in time for winter. Not being able to help myself, I did jump in the car and give it a short test drive, only to have the clutch fail! Not a fun job to replace the clutch, turned out to be the special bolt that holds the throw-out bearing ‘fork’ onto the clutch shaft. The bolt was sheared; hence the clutch would not release. I worked on this in July with a friend, and installed a new clutch, throw-out bearing, ‘fork’ and release lever, and finally was able to drive the car on the road. So far, I’m up to 580 miles since it was taken off the road back in (what I estimate) is the 1970s. The car only had 40,100 miles on the odometer …

At any rate, had the car at a show in Elkhart Lake on Saturday and had a fun reunion with the couple that owned the car back in the 1960s! Great fun.’

That’s one of the best parts of car meetings, you could walk straight past someone and not know their connections but turn up in your car and you get descended on by Avids. He further writes, ‘My car is great fun to drive but LOUD. Wow, earplugs were required for the hour drive up to Elkhart Lake. It’s fine for blasting around town, but any longer drives are painful to the eardrums. Any ideas on making this a more proper GT car? At this point it is behaving like a tube frame race car that has room for four. Which maybe they always were?’

Well yes, I guess they were, but we have all become desensitised over the years driving our reliable euro boxes on motorways at speeds we don’t notice. Then one sunny day, we throw back the garage doors, jump in to our pride and joy not realising in a flash you’ve travelled back 60 years in a flash … 88 miles an hour, Marty!

Another car that has just emerged from restoration (and serious upgrades) is GT2/00180 in New Mexico. This car is owned by Mike and he seems to be an avid importer of British cars. Some he uses and others he sells. He has sent me a very long list of ‘upgrades’ to the car which, if I were to add them here would put me way over my word count threshold! Just as a taster, it’s fitted with a TR6 engine/Ford box has AC and ALL TR6 running gear. If you are interested, I can pass the spec details on and also his website address.

Dan up in Cumbria has sold his ‘spare car’ to Peter who is looking to develop the car for Classic Le Mans in the future. Hopefully, we will still see Dan thrashing about in his ‘other car’ and in the future, Peter doing the same!

Once again, I have pressganged Duncan into sitting quietly for hours reading back issues of period motoring magazines and previous Club newsletters and give us his findings:

Reading through the last few issues of TR Action and also a thread for many years in technical questions and answers, is sorting out the hiccups of classic car ownership. This is a big part of being a member of the Register in my eyes. The ebb and flow of the questions and answers is very instant these days with forums and the like. Even the magazine is very regular. But from my dusty corner of the archive, times are slower but the same ‘hiccups’ are in the old Peerless and Warwick Owners Register news sheets.

A classic example is from news sheet No. 8 October 1975. Dudley Thompson, the then Registrar, devotes a paragraph to a phone call he had with Ken Wilson. Ken at this time owned 323 KBH, a phase 2. Now, of course, the owner of the Le Mans car. In the call, he let Dudley know he located a source of drive shafts from a JCB which he had fitted and were working well and he had also fitted a Vauxhall Viva fuel tank in the boot. But he was plagued by a vibration from somewhere in transmission. He had checked all he could think of; he even replaced the prop shaft. Still no joy. Dudley asked the readers if they could come up with any suggestions. Speed forward in 1970s time travel to News sheet No. 9 December 1975 and Dudley notes, ‘regarding Ken Wilson’s vibration problem, presumably he has checked engine and gearbox mountings. A less obvious area is the differential mounting. Someone had suggested a cracked crankshaft.’ I have checked through all the other issues we have in the archive which takes us to April 1978 and frustratingly I find no answer to the question. So not like now, moments after the myriad of suggestions to cure the fault, you can thank the world for the solution and rectify your car and others with the same fault can do likewise.

But Peerless and Warwick owners don’t panic, after 45 years I can give you the answer. I simply phoned Ken to ask what it was. His best answer was it went away when you drove fast, so just drive fast. The mundane answer was the De Deion tube hub flange on the inside fitted to the drive shaft to the differential was bent out of true. He spotted it one day when he had the back seat out doing something else. Solution, replace the quarter shaft sourced from a burnt-out Peerless. Sorry it has taken so long, but now you know what to check for with a transmission vibration.

Back to my dusty corner to read so please let me know if you have trials and tribulations with your cars, the old tombs may give you the answer! Just spotted, December 1976, need a rear silencer replacement? Then a Triumph 2000 fits with a slight mod. Nuggets of gold in these dusty corners.

Thank you Duncan for those wise words. If you have a bent flange … keep it to yourself!

Not quite sure what happened to the photos sent in by Roger, Honorary Secretary of our first (and hopefully only) Southern Chapter aka A.S.O.L.S. This was an invitation-only affair in early August held in the grounds of the Squire of Denge Marsh.

Looks like the last big show of the year, The Classic Motor Show at the NEC, has been cancelled. Also, I think it prudent that we don’t attempt to have a New Year Bash or even another of Duncan and Helen’s Spring Meetings. However, to keep morale up we could start looking forward to a possible Mid-Summer Meeting. Due to the distance between us all, I think it could be a weekend based around an existing show or a more private affair where we could all meet with accommodation to suit all. If you have any ideas of a suitable venue or meeting that would ‘tick our boxes’, please let me know, answers on the back of the usual folding item with a monetary value, unharmed!