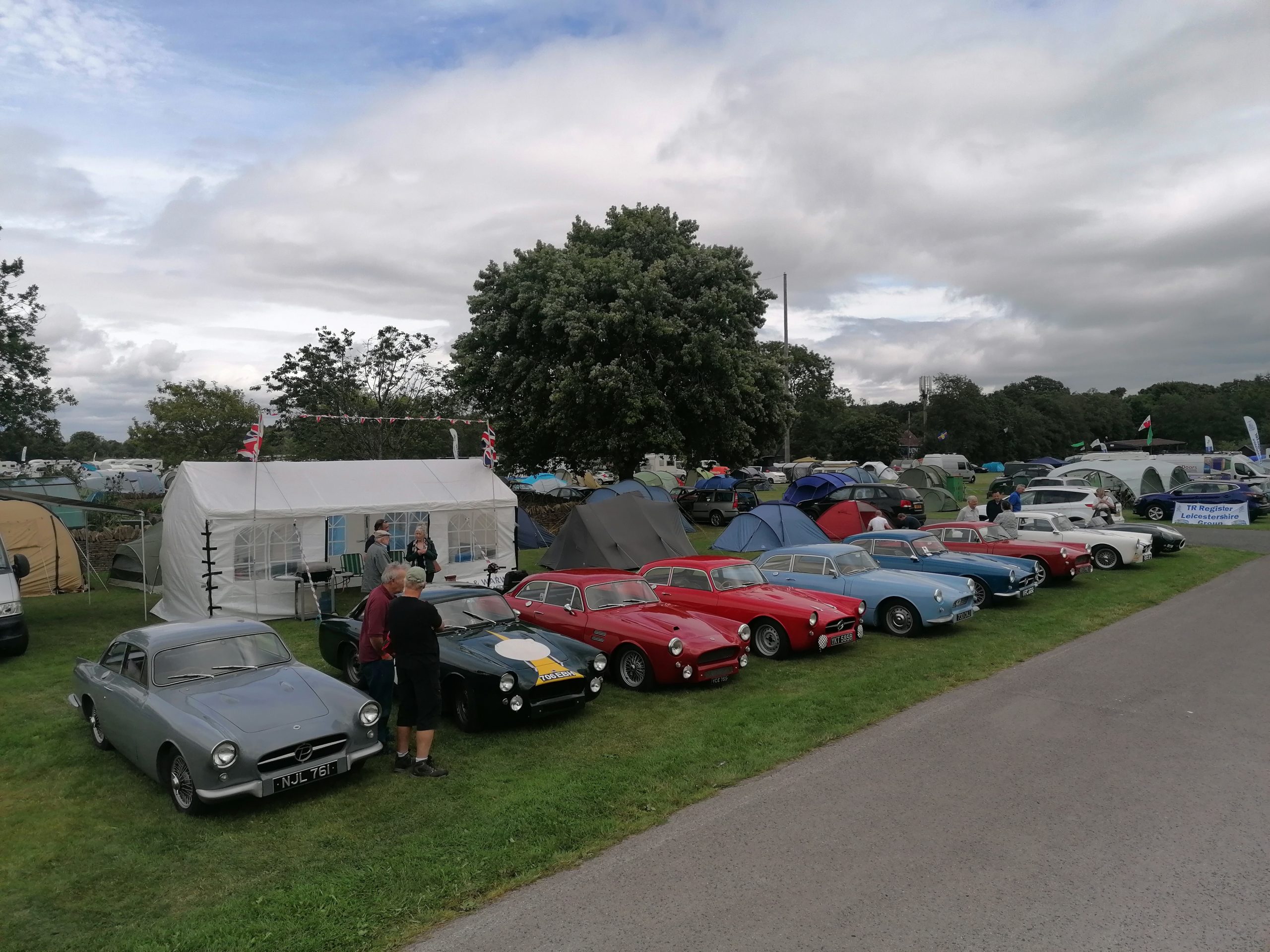 Well didn’t some of us have a lovely time in Malvern this year! The sun was shining, a great turn out of cars on the Saturday and lots to see and do.

Yes Avids, the Inter Club event held this year at Malvern was, by all I talked to, a great success. A really good vibe around the site and I think this was partly due to having more younger people about with MG’s, spitfires and Heralds. Even our little gathering had attendees under 50!

The P&WOR BBQ seemed to go down well as usual (24 mouths fed) and my thanks to the Present Mrs Cluley for all her preparations and bringing it all in “on the day” …..I just added the black bits to the sausages.

From my, and of course Richard’s perspective, it certainly was the busiest weekend we have done with so much more ground to cover and organise with the other clubs attending, thanks mate.

Very pleased to see Gary Stretton’s car at the show for the first time. He has worked very hard to get it together this year whilst also working on other people’s cars too. Lots more to do I know but as we all told him, you never really finish them.

Also, great to see Ken in the Le Mans car this year after an epic 9-hour journey down from Cumbria (due to road works/traffic)and it sounded much the same for FJ’s road-train and his attending staff coming from Kent. Thanks to Frank who talked Lesley into towing the caravan down so they had somewhere more comfortable to stay over the weekend and Tim for bringing his mom, Pat down to see us with poor Kerri wedged in the back. Luckily William’s dad didn’t suffer the same fate in YCE as they only came down from Retford for the day too. Stuart, our sturdy stalwart from Staithes only came to give us a quick flash of his new bonnet hinges and Richard snuck in on the end with his D type as it has a fin!

Duncan brought their very pretty Herald 1200 saloon and found he was the only one in the arena to celebrate this particular model! Final tally for Saturday, five phase 1’s, one phase 2, two Warwick’s and a Herald. We didn’t get in the arena until the Sunday and numbers were down a little by then but we still put on a good show.

Salvador Del Castillo Olivares (or Boro for short!) writes again to say he has received his new P grill and is very happy with it, unfortunately he has had a setback fitting the screens to the finished car. Whilst in storage a surf board was left on the roof of the car and the glass was not fitted at the time. This resulted in the roof dipping slightly (as the board was light) and the glass will not go in. He has had to do this modification to get it back into shape. As you can see the car was already in finished paint and so this is a set back.

For those of you that have not attended any of our shows, our Gazebo has gained the moniker of “Peerless Towers” due to its size. Sadly, it has seen better days but has served us well for more than 15 years. The final straw came in the shape of Jon “The Pyromaniac” Nolan (or “Matches” as his cell mates called him) who tried to re-enact the opening seen from “Saving Private Ryan” and dropped a Pringles container down the neck of his Chimenea (this is not a euphemism) and the subsequent fallout rivalled Chernobyl. Luckily a very helpful passing Irishman (brandishing a hammer and a very large tent peg!) opened the windows and roof vents (that we never realised were fitted) and carried (single handily) the offending, belching, smoking item outside to safety….and the Chimenea too!

The result of this debacle means we no longer have a gazebo (the Denge Marsh Tinkers carried the remains off) for future events. Some of our Members who were at the show kindly gave me a start with donations towards a new Gazebo and Duncan & Helen have said they will do some research to see what’s available and I will report back. Hopefully this will be a smaller/lighter item to carry (and store!) in a car and if funds allow, I’m looking to get a pull up graphic produced to give people more of an idea about our club and a couple of sail flags to “raise brand awareness” or more to the point, pre warn others around us!

Quite a few (at the show) asked if I we were going to have a NYB as we had to cancel our last one “due to the dreaded”. I have talked to Stephanie at the Kings Court Hotel and they are very happy to have everyone back, especially the kind old gentleman with the Braces, flat cap and walking stick who said he would pay the bar bill next time.

They are offering the following deal: £80 for B&B (£70 for single occupancy) and £25 per head for a three-course meal with tea & coffee. This is a slight rise from last time…but then isn’t everything these days. Let me know if you are interested and I will get the ball rolling or if you have a venue that you have used recently and feel its right for us ask them what they can offer costs wise.