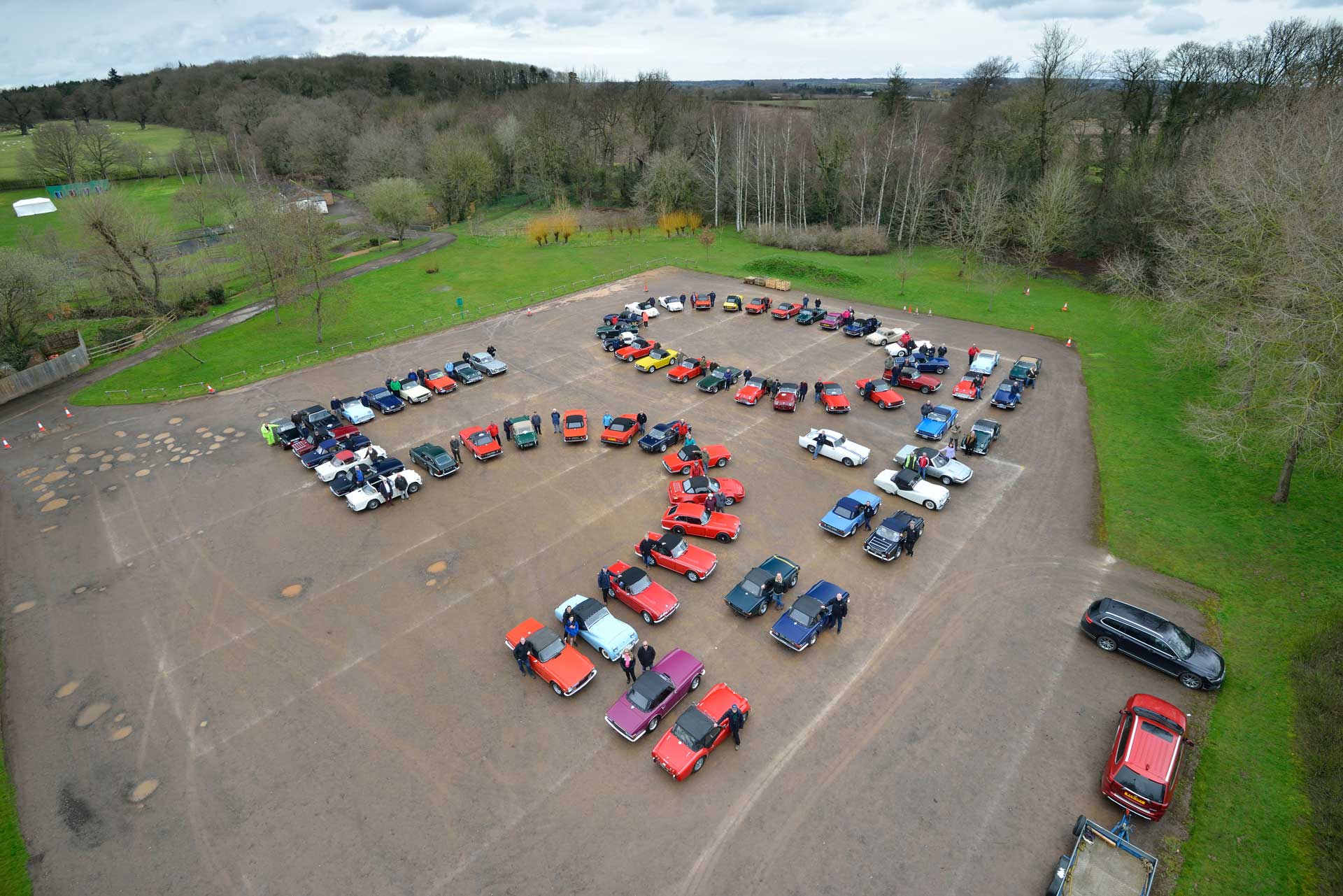 I hope you and yours are all fit and well and, if you can, getting all those jobs done to free up more cherished time to be had soon. Looking at well known auction websites there doesn’t seem to have been a drop in sales/prices over this lockdown period. Maybe people are getting stuck in on that resto at the back of the garage in stead of selling it, I wonder if any of the TR traders could comment.

Tim Clayton has sent me a couple of photos of his “fresh out the box” Phase 1 restoration. He also sent me some video of it running but that doesn’t seem to work so well in print so you will have to do with the photos and make the noises yourselves. It looks great and I can’t imagine how frustrating it must be to get it all together after so long and have no shows to go to etc. Still I’m sure we will all get together sometime.
Over in the Netherlands Erik is still getting stuck into his latest acquisition. As you may remember from the last report, he’s bought a ph2, he writes:

Reasonably good condition for its age, matching numbers, still has all of the specific Peerless parts. It was imported to the Netherlands in 1985 from the UK, and since then its been standing inside, not running.
Now I have started working on it trying to give it a quick mechanical restoration not worrying too much about the looks.So far I have replaced the chassis front member, realigned and repaired the nose of the car and the left front wing.Engine block has been cleaned in an ultrasonic bath, ready to build up.
Cylinder head is being converted to leadfree and the Crankshaft and flywheel are being ground and balanced.
Next big thing is taking the body off I’m afraid, to replace two more chassis members and the floors. If anyone has any information on this car when it was in the UK please get in touch as I would like to know more of its history.

I have some information which I have given Erik but if you remember anything, let me know. Its registration in the UK was 985 CYL. Remember this was the car with a near perfect original chassis, oh how I laughed when he initially told me!

I have had several Avids contact me with details of a car up for sale on Car & Classic and then eBay. This is one of Dan’s cars in Cumbria (his family race a black ph1) . As far as I am told it is 95% complete and RHD. I’ll let you know the outcome.

Mike up in Scotland has been all over our forum as he’s really getting stuck into his restoration of a Ph1. Chassis all done now and moving onto fitting the new outer body shell to the frame and backing up with inner panels/flitches etc. Gary has very kindly divulged some of his professional ideas and fixes to help spur him on, I’m sure I could inspect his work from a safe distance of 2 mtrs?

David in Pennsylvania just emailed to say he’s bought a Ph2 and is looking for front seats and glass. If anyone over there can help please let me know, I could always drop some off on my way back from Scotland….

As my fellow registrar’s can no doubt confirm this position can be a lonely place sometimes when all you get is demands for information/searches/parts cross-overs etc so it was very welcoming to get an email from Jeff, a TR7 V8 member just to say how he enjoyed the report. Thanks Jeff and hope to hear your V8 growl soon!

Sadly, Dean in California flagged up that we lost another one of the fold from the past in April. Colin Ham, son of Ron Ham was a young man with an 8mm camera back in the day and followed his father, Bernie and others racing around the country in the early 60’s. Dean says “We were fortunate to interview Colin with professional sound and audio equipment a few years ago. I hope to release that footage eventually. He was a wonderful and patient man.

Well didn’t the Leicester Group do well with this project, as Dick Goodey wrote in his report it was a very changeable day but the photos look great, even if I did have a staple covering my best bits! Talking to our illustrious Editor he referred to it as “That central spot was a curse in disguise as it turns out!” which I initially took to heart but then he more than redeemed himself with reference to The J Geils Band hit from the 80’s, Angel Is a Centrefold….Mr Ferris, I fear we may have another lyrical challenger in our midst.

He’s really getting into the swing of things is our Duncan, this time he reflects on Fred Nicklin’s involvement in the Peerless Le Mans entry in 1958. I managed to get back in touch Fred and when he was back in the country again we met up (pre Covid 19) and a had a chat about his experience’s working for Triumph and his involvement with the Le Mans Peerless. Duncan writes:

We have been lucky enough to be lent by Fred Nicklin a folder he has put together about his time as engine builder and mechanic to the Peerless Cars Le Mans team in 1958. In the folder are great items from the day, team passes, vehicle pass, photos he took at the time of the cars and people. Then there is his history written down of the events leading up to, during and after the event.  “ add pic of passes”

Fred who had started as an apprentice at Standard in 1947 and at this time was a fitter in the engine shop (now Standard Triumph) along with a colleague Doug West who was in the engine test section, both of them living in Coventry.  Fred Sets the scene.

It starts with Jimmy Byrnes creator and director of Peerless Motors later to become Peerless Cars.  From Jimmy’s Triumph factory connections and racing scene connections he contacts late in 1957 Doug to come for a beer at his pub to discuss racing cars and bring along Fred. His pub was the White Horse at Balsall Common.  It seems it did take until 3 am with lots of free beer to seal the deal! They would build the two engines and mechanic at Le Mans.

They were loaned a workshop in Coventry that had been a part of a Grand Prix car idea by a consortium for Coventry business men that never came to anything.  Here they stripped and blue printed the two engines. Using all the original parts except they put new bearings in. They had to keep in contact with the FIA scrutineer; they had to stamp parts like pistons to ensure no foul play. Peerless collected the engines from them in the works van a Commer Q25 “insert van picture”.  This van was then their transport to Le Mans.

Taking their annual leave from Triumph, Fred and Doug on the 9th June 1958 arrived at Peerless Cars Bath Road Slough with toolboxes and suitcases. They were expecting to find the two cars no 24 and no 63 ready for a final check, pack the spares and go. What they did find was only 60 % completed cars, so jackets off sleeves rolled up and get stuck in to finish them with help from Bernie Rogers and the works foreman.

The cars were driven to Le Mans to run them in. Following them was Fred and Doug in the works van at its max speed of 50mph. John Gordon cruised down in his Jaguar.  They were to stay at the Hosteller des Ifs in Rue St Marie (unfortunately no longer there) close to the town centre of Le Mans. The hotel had a long connection with the 24hr Du Mans. Other teams like Morgan had been based there in the 1930,s. “Insert hotel picture sticker”

The garage for working on the cars was at the back of the Hotel, they were the old stables and coach building with a dirt floor.  At this time the cars were fettled here and driven over to the Circuit. “ insert picture of 24 and 63 in the garage”.   Off number 24 goes to race.

The race its self I will leave for another time a whole story of its own. After the race Fred and Doug went back to their normal jobs with Triumph. Holiday over, some holiday though.

A big thank you Fred for loaning us your folder, fascinating history and also to John Nolan who recorded an interview with Fred in 2000 “ insert Fred and no 24”

As to the second car no. 63.  I said last time we do not know what its overall fate was after Le Mans. This is what we know before and directly after Le Mans, from Fred’s history.  Peerless cars had entered the two cars. 24 gained a full entry and 63 was a reserve car. So it never raced as all the other entries started. After the race it was driven back by its driver I B Baille. In Fred’s history he says they were waiting at Dover to go through the Carnet check when no. 63 pulled up alongside them missing the windscreen and roof! They had managed to drive through a level crossing barrier. it was driven back to Slough and that is the end of the trail. The only possible information I have seen is an advert in 1961 Autosport by Bernard Roger Developments Ltd. Bernie Roger was now building the Warwick GT and offering spares and repairs for Peerless cars. Stating a Peerless for sale with all the Le Mans parts. Was this no 63 with a new body? No 24 had been sold not long after the race. Once again thank you Duncan for rummaging through our archive and Fred’s folder. I will get back in touch with Fred and let him have it back when we can meet up safely.