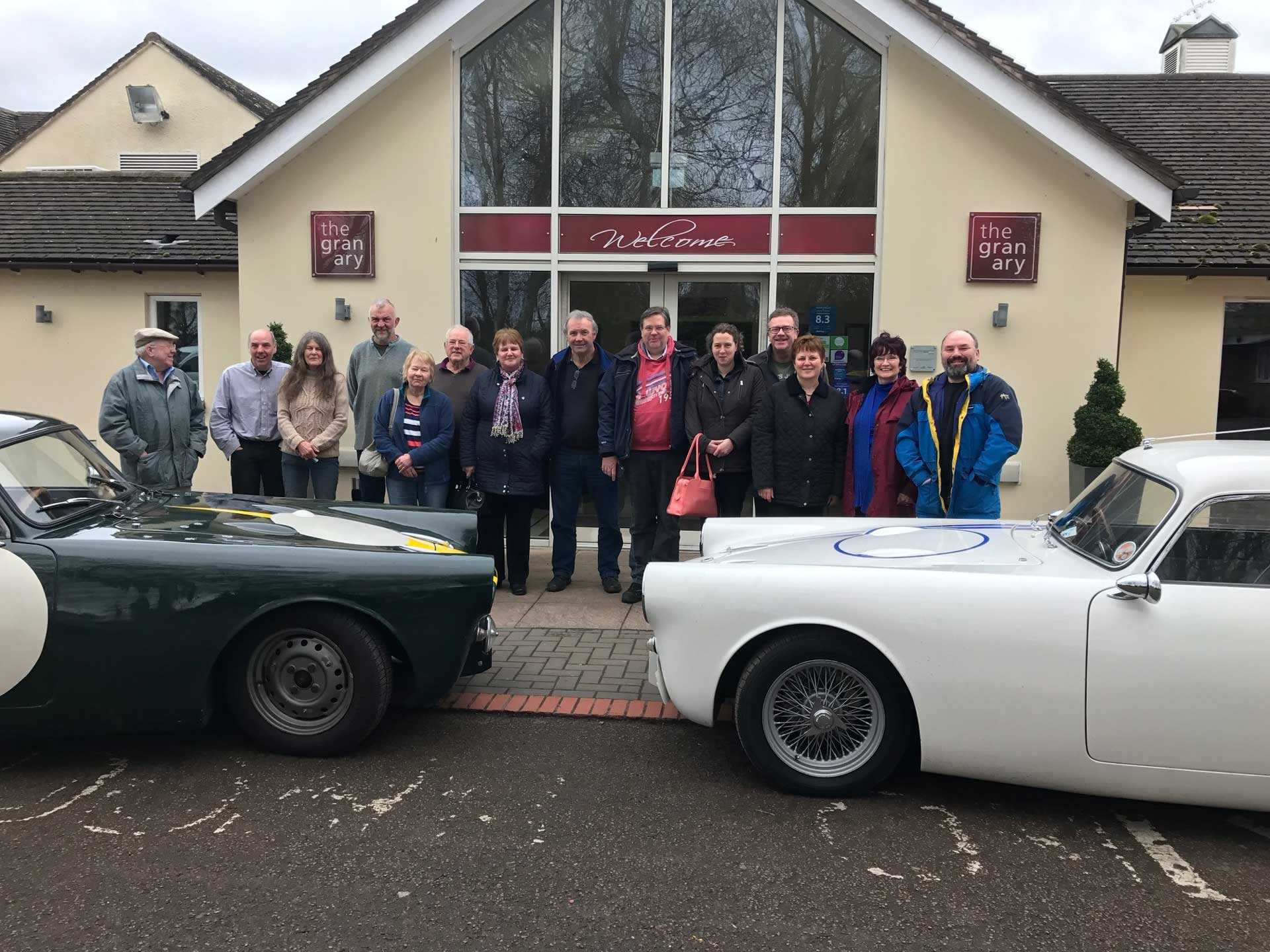 Soooo, how was 2017 for you and your faithful stead? Where did you go? What did you do? I managed to get mine out quite a bit in public (court case on Thursday) Here’s a little run down of what I can remember…

We started off with Dean Caccavo tooling up to make his own “aloonanum” gutter rails!. He continued to make great progress until moving house so that’s taken the pressure off all of us (thank God) as he’s distracted with a large list of jobs from Donna. William Ingleton had his car displayed on the TR Enterprise stand at Race Retro and I dropped in to see Tim Clayton in his garage (after giving his mom, Pat, a squeeze of course) to see the progress of his restoration, by now it should be in paint and he’s stating on another one soon. I saw a few stalwarts braving the cold at the MG & Triumph spares day at Stoneleigh and what may be the only original Warwick GT350 comes up for sale in the states and subsequently sold to Daniel from Munich.

Hurtling over the horizon was our very own NYB, well attended by the faithful few and a great time to catch up in the warm. Wolfgang had his car on display at the Luxemburg Classic car Show and Hugo van den Berg (who owns 1688 MC) has the chassis fully assembled and ready for the body finishing.

Then perhaps our most amusing story of the year. Who remembers Bob Wadman from Utah and his amazing journey (yes it’s not just Strictly stars that have journeys you know!) of 2500 miles, with his wife riding shotgun, to buy and trailer home a total restoration Peerless project. I can report back now that he is trying to accumulate parts and intends to start over the winter….and he’s still married!

The first race info of the year came from Dan Smith and family in their Peerless who went off to the Creg Willy Hillclimb on the Isle of Man and Celia raced the V8 Warwick at Mallory Park.

I took BP over to Jersey for a family holiday and then two weeks later onto Southern Ireland with Team 710 for a (very) quick road trip ending at the Dublin Classic which was excellent.

Before you know it we head into July and blow me down, the TR Register International descends. A great time (what I saw of it) but significantly low on numbers. Talking of significant numbers (see what I did there, Radio 2 here I come) the 300th copy of TRaction lands on 7000 doorsteps around the world, what an achievement for a one-make (and Derivatives) car club. Well done to all that are involved. And throughout this first part of the year, there was a great deal of correspondence from A Stranger, Jilly Boel, but sadly she has Said Goodbye to Hollywood and that will be the last we will see of her (I hope, Mr Ferris).

JJ Matens gets in touch from Belgium to say he has bought Jean Jacques Peerless from Paris and has sent it to Rumania to have it restored to race spec (these cars do get about a bit don’t they) and FJ gets the final coat of paint on his Warwick.

Alan sends the first of his “archive reports” in as we head towards 60 years of these cars first appearing. Let’s hope we see more from him over the next couple of years as we have a lot to celebrate and I suspect we have a few new readers that might not know the whole story (hey, I don’t know the whole story!)

Talking of the whole story (more links than a golf course) Jim Bollinger gets in touch from the states and gives us a very interesting story with a great deal of research material about Peerless Dublin Ltd and how he thinks he has found the car that was shipped to Detroit to try and sway General Motors into joining the project. This was a fascinating story that I’m sure will evolve further this year. Also on the historical side of things, Wolfgang drew my attention to a guy selling press shots of a Peerless GT in the states suitably adorned with Dorothy Deen in the rear seat. And the final historical artefact in this paragraph is Celia racing at Silverstone in the All Ladies Race.

John Morrison sticks his head above the parapet and takes on organising the P&WOR trip to Classic Le Mans in 2018 (but for some unknown reason wants to bolster the numbers by allowing TR’s to come with us, dam cheek!) and Gary Stretton starts his engine up for the first time (and we all know how that feels)(who, Gary Stretton?). I bumped into quite a few members at the NEC classic motor show in November and then before you know it we’re hanging out the tinsel and the years at an end, for a small group we do manage quite a lot but not always together! Sorry IF I’ve missed something out, if you want to complain, I’ll give you FJ’s address.

Tom Heinrich from Milwaukee has emailed to say “I have decided on the tanks to plumb them with a by-pass, so basically linking them together. After problems with my XJ-12 Jaguar, which uses a similar dual-tank approach I thought to treat the two tanks as one large tank, so will only need one fuel pump.  And will be able to fill from one side as an added bonus.  And will make the fuel system plumbing and electrical much simpler (no switch, one sender required, one pump required).  Have you heard of anyone re-engineering the fuel system in this manner?  I might use the switch to turn on fog lights or some-such.  Actually, the original switch was destroyed by the mice living in the dash, so a new switch would have to be sourced.

So, has anyone done this little mod? Answers on the usual currency (and that means current/in date/not forged currency FJ!) I did write back to say that I have a “take-off” at the front on the offside and at the back on the near side as my first house had such a steep drive that I could run out of fuel whilst parked at home. we’ve since moved house (but the kids still found us) and I now have a flat drive…..and still ran out of petrol!

Now, this heading doesn’t come up very often as most cars these days seem to sell on eBay before we know it. I currently have three cars in the UK for sale to the genuinely interested.  I have two cars up in Scotland, one is LHD, freshly imported from the states with all the correct paperwork. Very original but the body is badly damaged (but we can supply new bodies these days….no FJ, we have nothing that would fit you!) so it would make a good restoration project. The second car is complete, has been “tampered with” and is all to do.

The final car is down in Wiltshire, it is totally stripped and awaits a full restoration. The body is the clincher in this deal, it’s an ex-works shell (probably from the Bankruptcy sale) and has never been on the road and is in exceptionally good condition considering it’s nearly 60 years old. There is also a lot of spares with this project.  IF you are serious about getting involved with one of these projects please contact me in the first instance. These cars are only coming on the market due to ill health and my members do not need “slipperwearintyrekickinteethsuckinheadscratchin-…people!” taking up their valuable time.

Things are moving along swimmingly with this year’s first event. I have been asked if it is possible for the Granary to put on afternoon tea, mainly I’m guessing for those who travel a long way (or just downright greedy). Kay on reception has come back to me to say that they would be happy to do this between 2-4 pm on Saturday at a charge of £14.95 per head in the restaurant area only. This will also need to be pre-ordered a week before the gig. Please let me know what you think. f you are likely to take this up get in touch with Kay at the Granary Hotel 01562 777535. This may be a good idea to stretch the weekend out a little as it’s a long way to come for most of you, kind of like a “pre-pre-natter” (sounds like my dad’s Cluley starting on a cold morning).