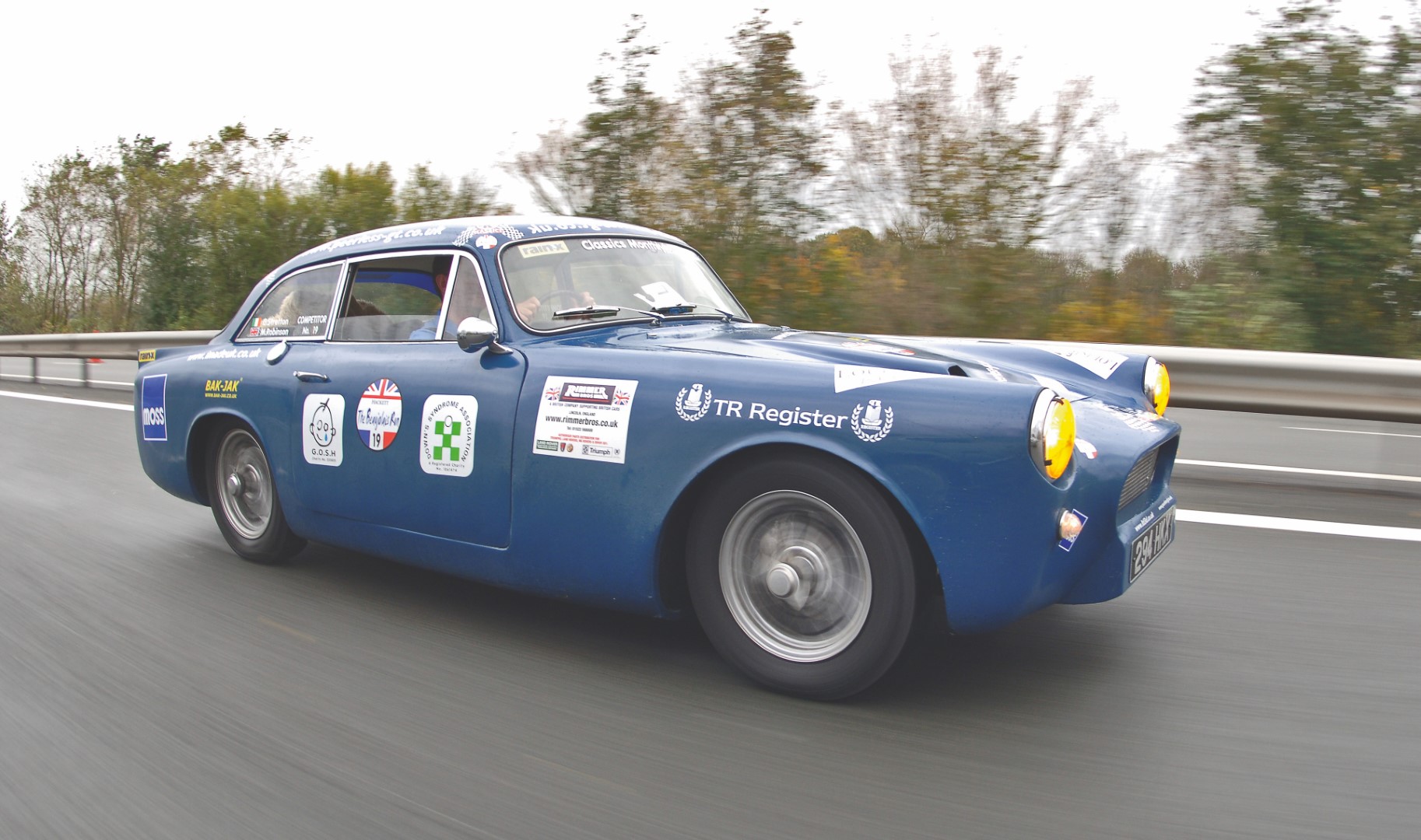 Yes, Gary Stretton finished 15th out of 28 cars in the Hackett Beaujolais Run 2006. Quite how he managed this dressed as Austin “Polyester” Powers with all the camera equipment pressed up against the windows, Spiderman wedged in the passenger’s seat, a boot full of wine (personnel consumption only…yea right have you seen how much this person can consume) and a phrasebook published by the National Farmers Union it’s a wonder he got back alive!

I went down to see them off from Goodwood circuit on the 14th of November. Leaving home at 5.15 am the roads were quiet and I made good time. On arriving in the paddock just before 7.30 am I found Frank, Gary and his photographer Matt fettling the car ready for the parade lap. After the drivers briefing and short speech by Damon Hill, it was off onto the track. One wet lap later and they were heading for the Eurotunnel. I’ll let Gary take over from here:

Arrived at the Euro tunnel at 11.30am: Calais to Reims and Verve Clicquot, champagne tasting before retiring to our hotel. Lots of hotel bar banter etc

Wednesday 15th: Reims to Macon via six checkpoints, deciphering clues along the way to find where the checkpoints were, in fancy dress. Me as Austin polyester Powers and Matt as Spiderman. We left at 9.am in the morning and rolled up in Macon at 7.30, having found all the checkpoints.
Memorable quotes:

“just love your (Aston, AC, Bristol etc).”
“It’s not a (etc); it’s a Peerless”
“A what”
Five-minute conversations usually followed.

“What the bloody hell is THAT. I love it!” quote from
Winning driver of the Lotus Esprit S3 after we met at Checkpoint 2 – They couldn’t shake us off en route

Euro tunnel asked me not to start the engine until all the doors on the train were open as the Peerless exhaust was tripping their fire protection system. Car was totally reliable, covering 1500 miles in 36 hours.

I told Gary these cars were hot stuff. The charity auction raised over £20,000 on the first night and to date the total stands at £75,000.

Gary would like to thank all the members who have donated to the charity web site www.justgiving.com/classicsmonthly this, by the way is still running if you haven’t already done so check it out. So far The Classics Monthly Peerless team has raised £3000.

Paul Confavreux has been in touch to say he has started the engine in his rolling chassis after 30 years and thanks to Bill Piggott in helping him to obtain the original registration again. Well they hadn’t got a leg to stand on really as he is the only registered owner for the last 42 years!

Dennis Marcus has sent me some pictures of 700 BKA that I mentioned in the last report. He says that the chassis and body are in such good condition that he’s not going to separate them. Being a Phase one car I don’t blame him as it is a lot of work. It sounds like a family affair as his brother is being dragged in to do the wiring; I wonder what Dylan his 3-year-old son is going to help do.

The Blue Warwick JSL 406 has been sold for an undisclosed sum; the new owner Jim Prentice has said he wants to convert it to a V8 for racing. He already competes in an ex- Alan Mann Mustang in the top hat series.

Mike Rutherford has been in touch and is looking for another Peerless, after selling his car to Celia and Ian he has improved his garage and is missing the oily patch on the floor. Can anyone help?

Bob Wadman emailed from the States to say he has bought the yellow “modified” car that was advertised on the web site. He owned a Peerless in 64 and regretted selling it, looking at the pictures of his new purchase he might regret it again!

This year will be the starting point of our 50th anniversary. It was in the spring of 1957 when the first prototype was registered and we mustn’t let this slip by unnoticed! So, what are we going to do? Hopefully, some of us will have chewed this over at the New Year Bash but I would like to hear your ideas and what you want to do. I’m not looking for extra work you understand and would be looking for members to take on certain areas like historical articles; trips to places connected to the cars etc.…there are only so many plates I can keep spinning on my own!

Paul Confavreux has mentioned that he is in contact with the Slough Museum and is looking into the old site and information on that period and Celia has kindly volunteered to talk to the ACO at Le Mans to see if we can get a display area for 2008. So what can you do?

We have been invited to Prescott on the 12th and 13th of May 2007. Diane and I went last year with the Cotswold Vale TR group and had a lovely day. Timed runs go on all day of which you can take part in if you‘ve prebooked/paid. Jake and I went up in the lunch time parade lap, like his granddad he was waffling on about something or other until we hit the first hairpin wear upon I just got a “whooo” from somewhere down the front passengers foot well and then it was just that sweet, torquey sound of the four pot all the way to the finish line!

And the last item…2006, how was it for you? For us as a club it was, I think you will agree a good year. Celia and Ian racing at Le Mans, a fine turn out at the International with members travelling from abroad, well received display at Bromley, cars displayed at the NEC and Burford, Cars bought and sold, Gary’s entry in the Beaujolais Run, new body shells in production, full colour articles in prominent motoring magazines, new chassis’s for sale and even key fobs in stock!